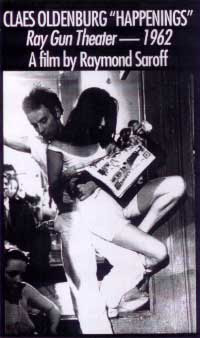 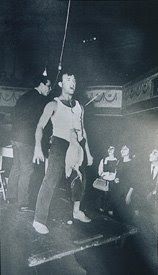 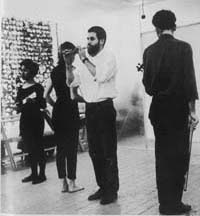 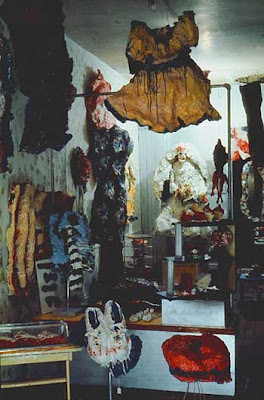 Went to the Whitney to see the movies of Oldenberg’s Happenings. I wasn’t interested in seeing his drawings or sculptures, his own or those in which he collaborated with his wife. I had hoped to see his “The Store” recreated (see color image), but all they had were bits and pieces. All in all the show felt thin and half-hearted.

I did enjoy the movies, all in black and white, and clumsy in a good way. Everyone looked like they were having a good time as they channeled Buñuel, Alfred Jarry, and John Cage. Best of all they looked like they were not taking themselves too seriously. This has become almost a matter of principal for me of late but may just veil my own fear of getting cocky, arrogant, or too comfortable in ones output. I’ve included a couple of pictures but these may be of Happenings by Allan Kaprow. A third shows the cover of a video by Raymond Saroff-“Claes Oldenburg Happenings RAY GUN THEATER-1962”.

The movie I focused on (they had five or six playing at once on different walls) had one woman dressed in a spangled swimsuit marching, saluting, and smiling big time. Then a man came in carrying a chair that he kept starting to sit on, but then he’d pick it up instead and move, and then a man at a table, who was trying to read a paper, kept having to pick up a woman whose head kept falling on the table. A woman behind them began to climb up and down a ladder in high heels that she had to poke through a sheet of butcher’s paper that covered the stepladder. These scenarios repeated and multiplied and the room slowly filled. I came away wanting to make my own little movies. I’d just use the little video component on my camera and use it to grainy effect.

For more on the times go to http//:Wrongshow.blogspot.com and see previous blog entry for Whitney.

Bruxism: involuntarily or unconsciously clenching or grinding the teeth, typically during sleep

Encounters With The Elusive Art

Art and The Bouncy Banker

The World In Disarray 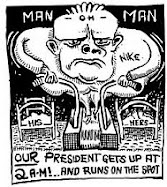 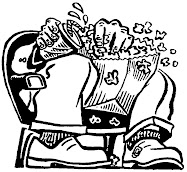 1.Using scalpel and mangled brush shall operate in the space between matter and gray matter.
2.Shall pursue the ever elusive Art, last seen in a bedsit in Tipping Sodbury, Hampshire.
3.Using White Noise will stand on a soapbox and rant, inaudibly.
4.Will keep making stuff with impermanence and biodegradability in mind.
5.Must accept the obsessive, compulsive behavior that requires me to make the inexplicable manifest in rows of figures and random iconic forms as the wonder and mystery unfolds and multiplies.
6.Will honestly try to allow my work to unfold however revealing the results may be.
7.Will censor myself and will undermine my censors (and will referee these inner debates).
8.Will make sense one day.

Art and Writing from the Bruxist Collective